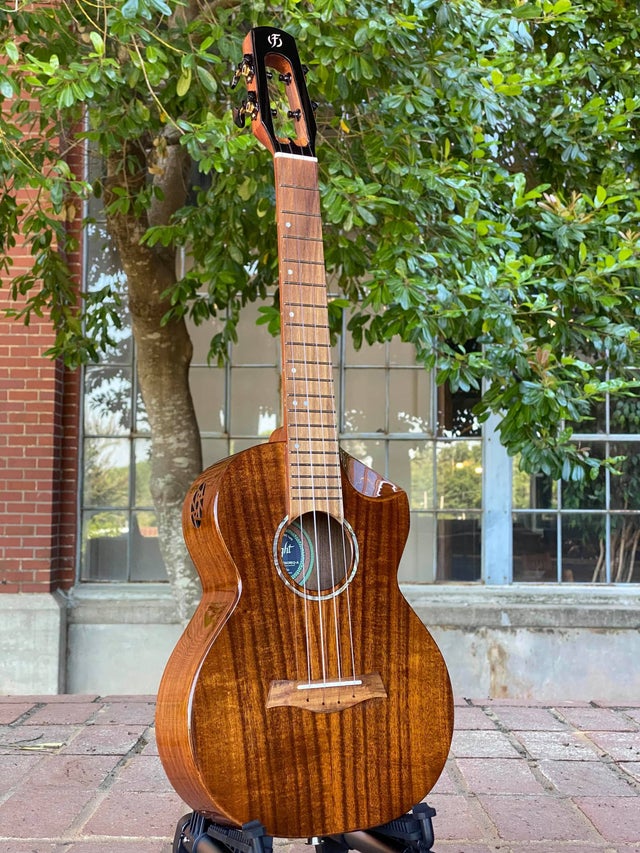 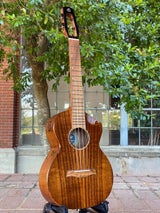 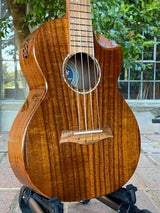 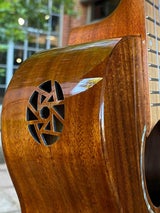 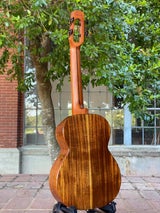 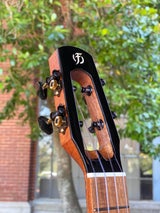 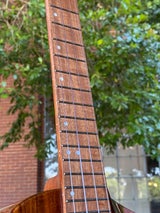 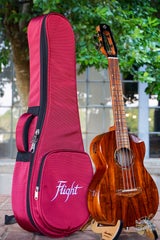 (Instrument pictured is the actual one buyer will receive. **The last 2 photos are stock photos)

Wild and free, only to be handled by true thrill-seekers. Flight Mustang is a tenor-sized, all-solid acacia ukulele with an infusion of red. It is packed with unique features: an intricately designed side sound hole, scalloped cutaway, offset dots on an acacia fretboard, D'Addario strings, and a unique and captivating headstock. It's not just a ukulele, it's a Mustang.

Acacia is a wood that has a long heritage in ukulele building for its punch, volume, and tone. For the Royal series Flight chose only the highest-grade acacia which sounds as stunning as it looks. Mustang has a reddish shade due to a special wiping technique, giving it an even more striking look.

Flight likes to try and test the latest ideas in instrument building. This has resulted in an acacia fretboard on the Mustang ukulele. The sound of a ukulele depends as much on the woods in its neck and fretboard as the body. The added bonus is that the appearance of the fretboard adds to the wild, uninhibited appearance of the Mustang. To spice it up even further, Flight decided to add offset fretboard markers, located not in the middle of the fret, but on the side.

A String-through bridge is one of the latest ukulele trends. It makes the top resonate better, due to strings being attached directly through the top soundboard, and not to the bridge. Changing the strings might seem a bit confusing at first, but actually, it is easier. D'Addario strings have recently been rising in popularity and after lots of tests Flight decided to feature them on the Royal series.

The scalloped cutaway was a real hit in the Victoria ukulele and it was a no-brainer to repeat it in Mustang and Spirit. This intelligent design allows for playing up the frets but without the compromise on volume and tone that many full cutaways inflict. It also showcases the absolute craftsmanship and mastery of Flight's luthier.

Why let everyone else hear how wonderful your ukulele sounds and not gain the benefit yourself? Flight realizes that you can hear the full tone and volume of ukes by introducing a sound hole at the top of the instrument. They also feel it contributes to the quality of the sound as a whole. Some people aren't a fan of the appearance of a side soundhole which is why Flight has created an intricate design that gives you all the benefits of a normal sound hole whilst maintaining a solid appearance to the structure.

Most of the serious ukulele brands use a passive piezo pickup, which is why Flight's higher-end models decided to shift from using the EQ system to passive piezo. It makes the ukulele lighter and more balanced eliminates the unwanted string rattle and provides a strap button.

Flight wanted their new headstock to be bold and striking, infusing innovation into all the benefits of a slotted headstock. Its round, airy shape not only looks amazing, but it also makes the headstock lighter.